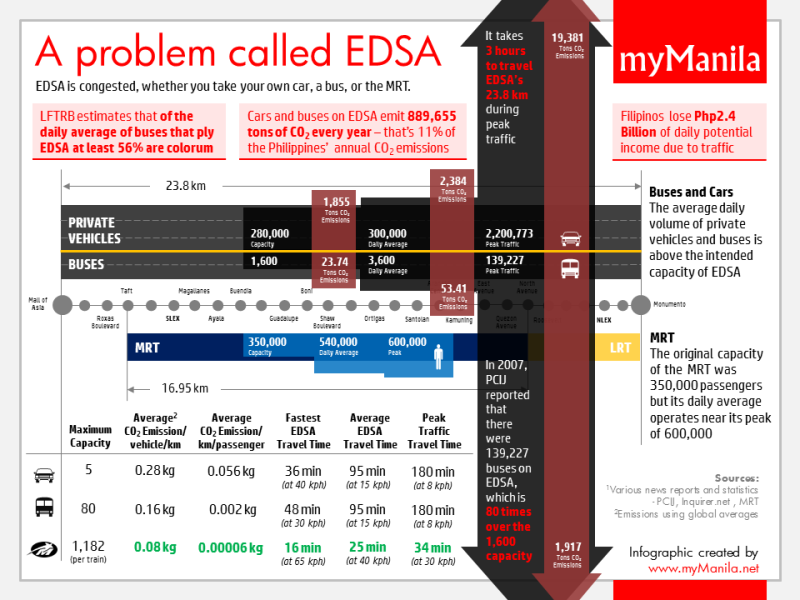 Every Manileno has had his horror story about EDSA - commuters blame private vehicles, private car owners blame bus drivers, and so on, and so forth. So we decided to study both sides of the story. Let's look at what's wrong in EDSA - from both the cars, the buses to the MRT.

First let's look at capacity - according to the Philippine Daily Inquirer, the maximum capacity of EDSA is 1,600 buses and 280,000 vehicles. On average though, there are over 3,600 buses that ply EDSA while 300,000 other vehicles choke it - that means on average, EDSA is always over capacity. As for the MRT, the intended capacity is 350,000 passengers, but an average of 540,000 passengers use the MRT daily. So they're all congested - buses, cars and the MRT.

We now know that on average - EDSA and the MRT is always congested - but how about peak traffic? On rush hours there are over 2 million cars and over 130 thousand buses on EDSA according to a 2007 report from PCIJ. That's 80 times more buses and 8 times more cars than the original capacity. The MRT is even scarier - if the daily average ridership is 540,000, the reported peak is 600,000 passengers. That means the MRT is operating at its peak almost all the time - more than 1.7 times the MRT's intended capacity.

The cost of traffic

So EDSA and the MRT is congested - big deal right? Let's translate the hours lost due to traffic (and falling in line in the MRT) into money. According to a recent report by JICA (Japan International Cooperation Agency), Filipinos lose over Php 2.4 Billion daily due to traffic. If you multiply that daily average to 365 and divide it by our 2012 GDP - we lose 33% of our annual GDP due to traffic on EDSA alone!

The cost to the environment

Now we don't have any data detailing the average CO2 emissions of buses and cars and the MRT. So let's look at the "reported" global averages - which is a little unfair because London may have a much lower CO2 emission than cars, buses or the MRT in Manila. On average - a 5-person car on unleaded gasoline emits 0.28 kg of CO2 per kilometer, a city bus with 80 passengers emits 0.16 kg of CO2 per passenger kilometer while the MRT emits 0.08 kg of CO2 per passenger kilometer and can even carry 1,182 passengers on a train with 3 cars. If you look at average emissions, cars are the worst because they're often not maximizing the 5-person capacity and even if they did, they emit 0.056 kg of CO2/km. Contrast that to buses and trains that emit only 0.002 and 0.00006 kg of CO2 respectively. Given these averages, the total daily CO2 emissions of buses and cars on EDSA accounts to 890,000 metric tons! That's 11% of the 2008 total Philippine CO2 emission!

So what's the solution?

We now know that EDSA and the MRT is above capacity and we now know that cars are the worst pollutants in EDSA (giving off an average of 2,384 tons of CO2 every day) while buses and trains are overall low pollutants. If our city wishes to hit two birds with one stone, the best bet is to really expand the train system - improving the train system will move people off of cars and buses which will cut back pollution and cut back volume on EDSA. Not convinced? Let's look at the peak traffic - the total peak volume of cars and buses on EDSA is 78x the current capacity, that means to even reduce 1/4 of that capacity we need to build 20 levels of EDSA - that's 20 floors stacked on top of each other and we are still at 59 times the peak capacity that EDSA operates! The 16.2 Skyway on SLEX cost 547 million USD, to build 20 levels of Skyway on EDSA would not only be impossible but would cost Manila upwards of 10.9 billion USD! On the other hand, the similar in length 16km MRT project costs 678 million USD and a similar line running in parallel (say on C5 or via a subway under EDSA?) would need only another set of tracks to cut the peak of the MRT ridership in half. These are just estimates and of course there are many other solutions - volume reduction, moving the business district/capital, taxing the road during peak hours, etc. - and I really hope that we see the solution at work in our lifetime.

How easily does Manila sink in flood waters?