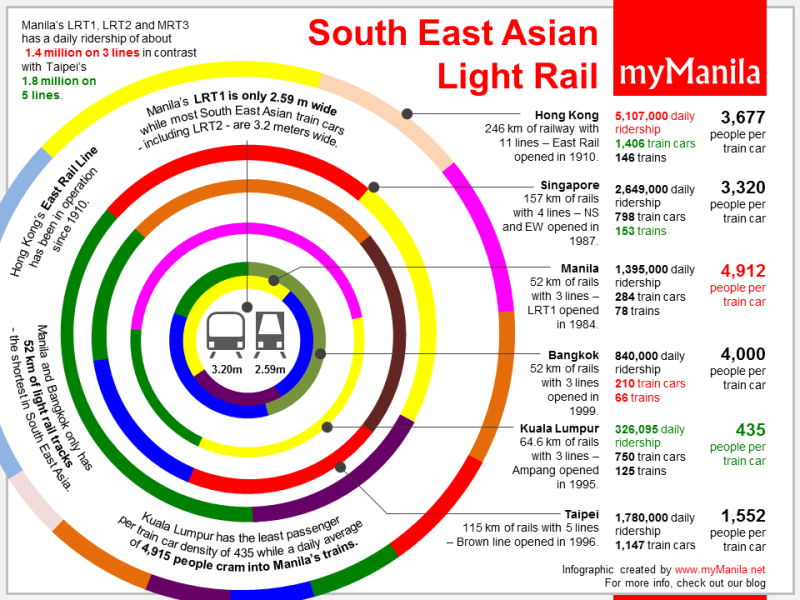 It says a lot for any country when a celebrity taking the subway is considered news. With a daily crush of commuters, Manila's light rail system seems to be doing its job and many people ask, what does it look like in other countries? Does Jackie chan taking Hong Kong's MTR make the front page? How about future Singapore prime ministers?

Why build a subway?

London has its underground, New York has its subway, so does Manila, Singapore, Bangkok, Kuala Lumpur and a host of other countries. In South East Asia, Hong Kong has the oldest system, opening their East Rail line in 1910. Bangkok is a bit of a laggard opting to solve the city's 3-6 hour traffic jams with a light rail opening in 1999. Manila opened theirs in 1984 with the yellow line (LRT1) and took 15 years before the next light rail (MRT) was opened. The latest addition was the purple line (LRT2) opened 5 years after that.

The standard gauge is used in South East Asia where most tracks are gauged at 1435mm with the exception of Hong Kong where Kwun Tong, Tsuen Wan, Island, Tung Chung, Disneyland and Airport Express gauge at 1432mm. Nevertheless, Hong Kong has the largest fleet in the region with at least 146 trains composed of 1406 train cars. Singapore has 153 trains composed of 798 train cars while Taiwan has 1147 cars and Kuala Lumpur has about 750 train cars.

The cars in the region are typically 3 to 3.2 meters wide giving ample space for passengers in different car configurations. Manila however has the narrowest where LRT1 is barely 2.59 meters wide. In terms of capacity, KL's monorail has the least where it can only accommodate 158 passengers.

Ridership is the best measure of how well each city is utilizing their rails. Hong Kong has the largest - with over 5 million using the 11 lines on a daily basis. Kuala Lumpur has the least adoption with only 326,095 passengers riding the lines daily. Manila's system is congested with 1.4 million taking the 3 lines daily.

Looking at the ridership only gives us the people going through the system on a daily basis, how would we get the number of people crammed into a train? We need information first on the number of trips that each car and train configuration goes through on average, for example - a 3-car train on MRT3 takes 10 trips on a daily basis, if 5 similar trains make that trip then 3x10x5 is the "capacity" that the MRT3 can carry on a daily basis. Dividing the daily ridership with that capacity will give us the average density or how full each car would be on average.

Since we do not have the information, we temporarily divide the average daily ridership with the number of cars for each country and from there we can see that it looks like Manila's is the most dense with 4,912 passengers crammed into the system's 284 train cars. Kuala Lumpur is the least crowded with only 435 people per train car.


Meanwhile, if you would like to see some pictures from light rails we've been on, check this out or search for "Train".

How To Train Your Dragon