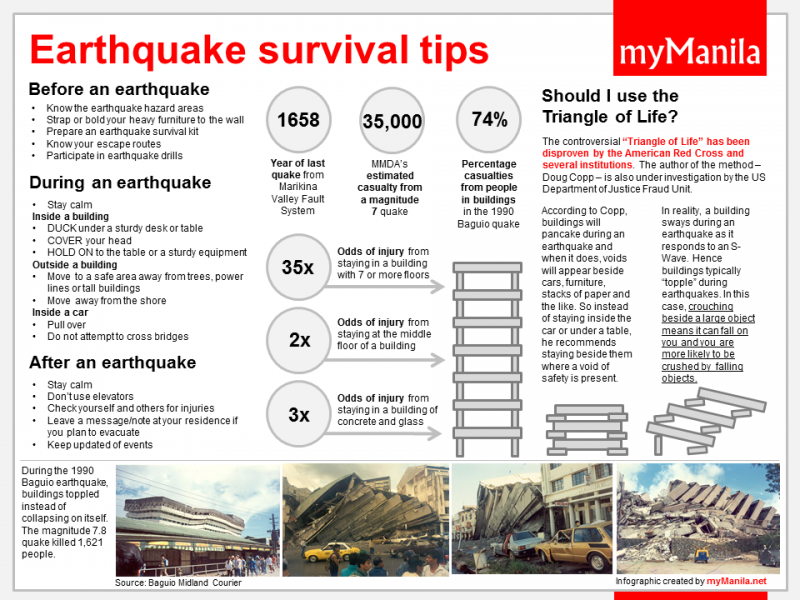 As of 1:43pm this afternoon, the death toll in Bohol and Cebu has reached 110. If you wish to donate to the victims, the Philippine National Red Cross is accepting donations.

In part of the news, we have been receiving posts, questions and other inquiries on how to survive an earthquake specially in Manila where the Marikina Valley Fault System has not moved since 1658. A 2009 study reported that the MMDA predicts a 35,000 casualty rate when a magnitude 7 hits Manila. The Baguio quake was a magnitude 7.7, yesterday's Bohol quake was a 7.2.

The official Philippine protocol for earthquake safety is still with Philvolcs here. We urge you to do the steps outlined to ensure safety.

Noting that, please be also aware that the so called "Triangle of Life" method by Doug Copp has been disproved many times by different experts and international bodies around the world. We urge you to please STOP sharing that meme/post/facebook status.

Now to the facts. If we look at cases and controls used to measure statistics in the Baguio 1990 quake, we are faced with some grim numbers. 74% of casualties were found in buildings during the quake. The most common injuries were contusions (35%), fractures (14%), and lacerations (12%). The most common causes of which were being hit by falling objects (37%), being crushed or pinned by heavy objects (29%), and falling (7%).