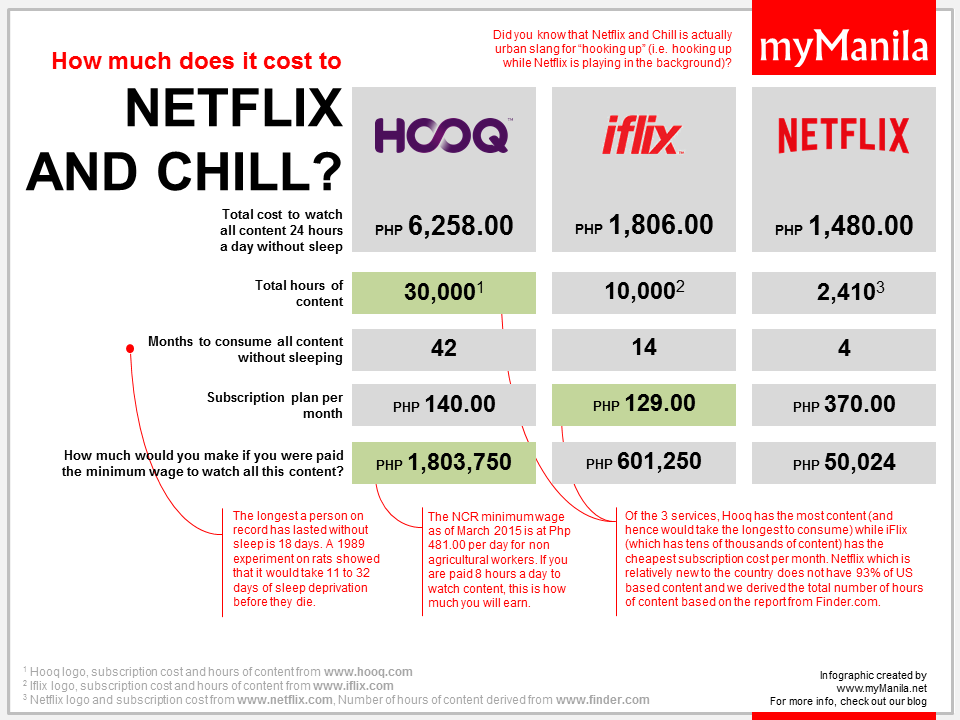 How much does it cost to "Netflix and chill"?

Netflix is finally here, and strange as it may sound, a lot of Filipinos are using the statement "Netflix and Chill" to denote their weekend plans without knowing that it actually means "hooking up" when they actually mean just watching Netflix at home. Slang aside, let's try to check how much it would cost to "Netflix and chill" using the 3 major platforms that legally stream movies and TV series straight to your device. Content-wise, it's easy to spot that Hooq has the largest library out of the three services while iFlix has the cheapest monthly subscription. Assuming that you plan to Netflix and chill the entire library that each service has, it would take roughly 42 months without sleep to consume all the content on Hooq, 14 months to consume all the content on iFlix and just a breezy 4 months to consume all the content on Netflix Philippines. Do note that the longest on record that anyone has been awake is 18 days and that an experiment on rats showed that they are likely to die after a month of no sleep. The rest of the numbers are above so we invite you to "Netflix and chill" this weekend (albeit without the hooking up part). Editor's note: The infographic incorrectly states that "Netflix which is relatively new to the country has only 93% of US based content..." this has been corrected to "Netflix which is relatively new to the country does not have 93% of US based content..."
Archived in
January 2016
Infographics
Taguig City
Tagged with
Chill
HOOQ
iFlix
Movies
Netflix
TV

How much does it cost to “Netflix and chill”?

The BEEP Card was introduced in 2015 and as of tod

It's 6 days since the #COVID19PH Enhanced Communit

Here's a #PopQuiz on #COVID19PH #Lockdown How many

This error message is only visible to WordPress admins

Error: Access Token is not valid or has expired. Feed will not update.