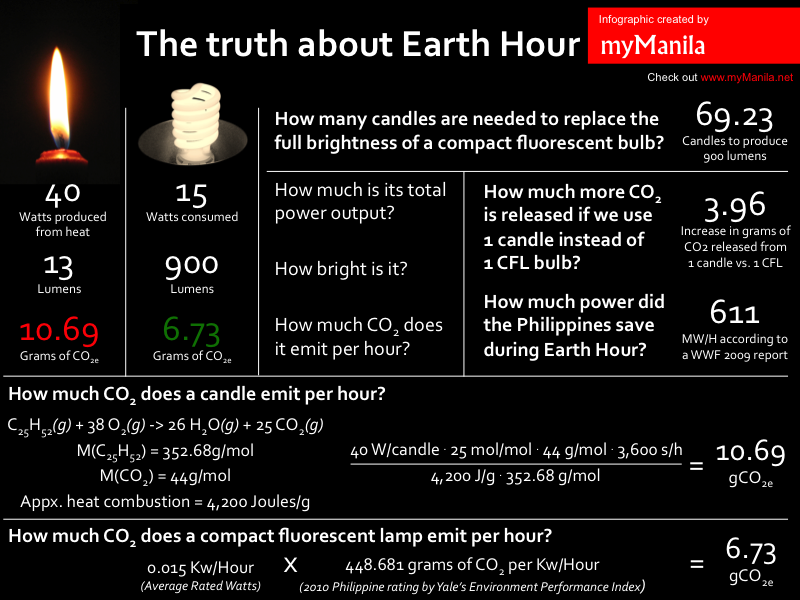 Last Saturday, friends and I celebrated Earth Hour in Eastwood but instead of turning off our lights and lighting up candles, we left 1 CFL bulb and we played a couple of board games.

We did our research and we found out that lighting up candles is costlier for the environment than leaving the lights on. According to the 2010 Yale Environmental Performance Index, the Philippines emits 448.681g of CO2 per kWH produced. That means a 15 Watt CFL bulb turned on for an hour emits 6.73 grams of CO2 per hour. Compare this to a standard candle that emits roughly 10.69 grams of CO2 per hour then the logic follows - instead of burning a candle, keep just 1 CFL on.

Looking back in 2009, the Philippines saved roughly 611 MW-hours due to earth hour. This is a savings of almost 2.7 tons of emissions from all those power plants to produce less electricity... but, do remember that for every light bulb we turned off, someone, somewhere turned on a candle (or 2, or 3, or 4 or more!). We don't have the number for candles used during earth hour but fact is, it would take over 69 candles to replace the brightness of 1 bulb and that's an extra 730 grams of CO2 released to replace that 1 lowly light bulb.

So what do we do now? Should we continue to celebrate Earth Hour? In my opinion, we should continue to do so but instead of lighting candles, change your bulbs to CFLs, use alternative power like solar and wind, change leaky pipes, start to recycle, do everything in your power to make Earth Hour really about the earth and less about the symbolism - skip the candle and go for more green.

Switching off this Earth Hour?