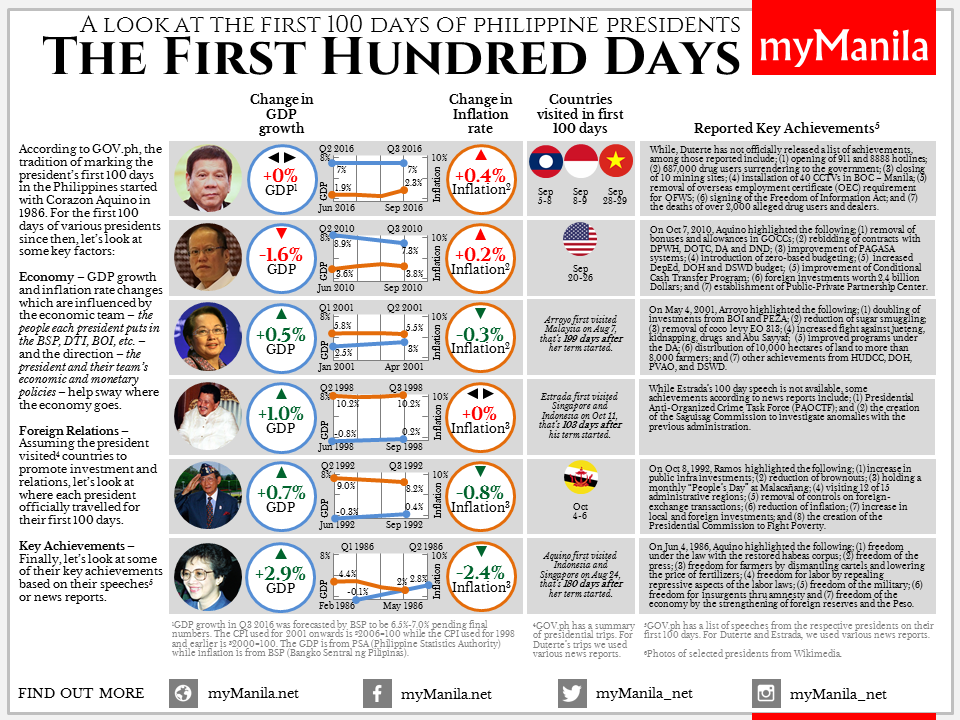 First a brief background, according to GOV.ph, the first 100 day tradition in the Philippines started with Cory Aquino (which she may have patterned from the US tradition of marking the 100 days).

With the exception of Estrada who was not able to give a 100-day report, the speeches of Cory Aquino, Fidel Ramos, Gloria Arroyo, and Benigno Aquino are available on GOV.ph.

For Estrada, we did a scan of his achievements from his site.

For Duterte, we did a brief search of his achievements and found the following: the war on drugs, the suspension of mining sites, the CCTV installation in customs, the exemption of OFWs from OEC, the signing of the FOI, and the opening of the 911 and 8888 hotlines.

Where possible (from sites or speeches), we removed "achievements" that are planned. Meaning, a policy, project, law or department that is yet to be executed is removed from the list of achievements.

While some may argue that the president cannot sway the economy on his or her first 100 days, the people (whoever they put in BSP, BOI, DTI, etc.) and the policies (monetary and economic - the Aquino administration for example stopped a lot of projects which meant that government spending decreased in his first 100 days) that the incumbent president takes, does impact the economy.

For the GDP data which are reported quarterly, we got the statistics from the Philippine Statistics Authority and for monthly inflation rates we got it from the BSP. Note that there is a change of index use between the presidents where a CPI of 2006=100 was used from 2001 onward while for earlier dates a CPI of 2000=100 was used. On an additional note, we're only using the ceiling GDP forecast for Q3 2016 from the BSP as the data has not yet been released. Additionally, we are only using the first 3 months for inflation for all presidents as a 4 month inflation report exceeds the first 100 days.

It is also arguable that foreign trips impact international relations. However we can assume that a president does a state visit to strengthen economic or diplomatic ties - Aquino for example brought in "promised" investments from his US trip while Duterte had similar discussions on his trip to Vietnam. A list of presidential visits is actually available on GOV.ph while Duterte's trips were taken from news reports here and here.
Archived in
October 2016
Infographics
Taguig City
Tagged with
100 Days
Aquino
Arroyo
Duterte
Erap
FVR
Presidents

The President of the Philippines