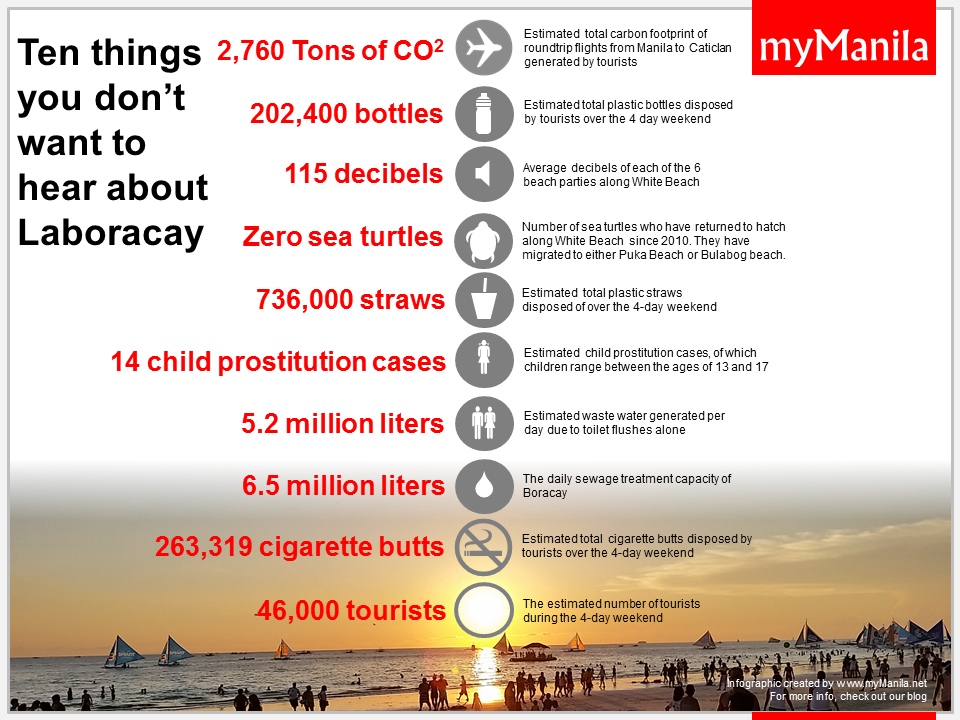 Ten things you don't want to hear about Laboracay

Welcome back from your Labor Day weekend!

If you spent the 4-day weekend in Boracay, (infamously known as Laboracay), then here are ten things you may not want to hear about your recent trip.

First is pollution - air, noise, water and land. If you flew to Boracay (Caticlan) from Manila, then you spent about .06 metric tons of CO2 for a round trip flight. That means an estimated 2,760 tons of CO2 was depleted over the 4-day weekend from people flying in and out of Boracay.

In terms of water waste - an average of 5.2 million liters of toilet water was flushed per day, take note that the sewage treatment capacity of Boracay is only 6.5 million liters.

In terms of noise pollution - did you know that there were at least 6 beach parties along White Beach? That's an average of 115 decibels for each event. Ever wondered what the impact to the island is for such a simple thing as noise? Consider that the last reported sea turtle sighting along white beach was 2010 and since then they have migrated to the quieter Puka Beach and Bulabog Beach.

Here's a scary fact, a study in 2010 revealed that there is an incidence of child prostitution in Boracay and since we were unable to uncover any news that arrests were made since 2010 we assume the same number (and maybe even more) can be reported. We are unable to uncover hard statistics on the prostitution on the island but it is hard to believe there is no such trade.

We sincerely hope that the next time you visit Boracay, you may want to consider the above statistics. Be mindful that your trip has a lasting impact specially if you turn a blind eye to things happening around you.
Archived in
May 2014
Boracay
Infographics
Tagged with
Environment
Labor Day
Pollution
Tourism
Vacation

Ten things you don’t want to hear about Laboracay