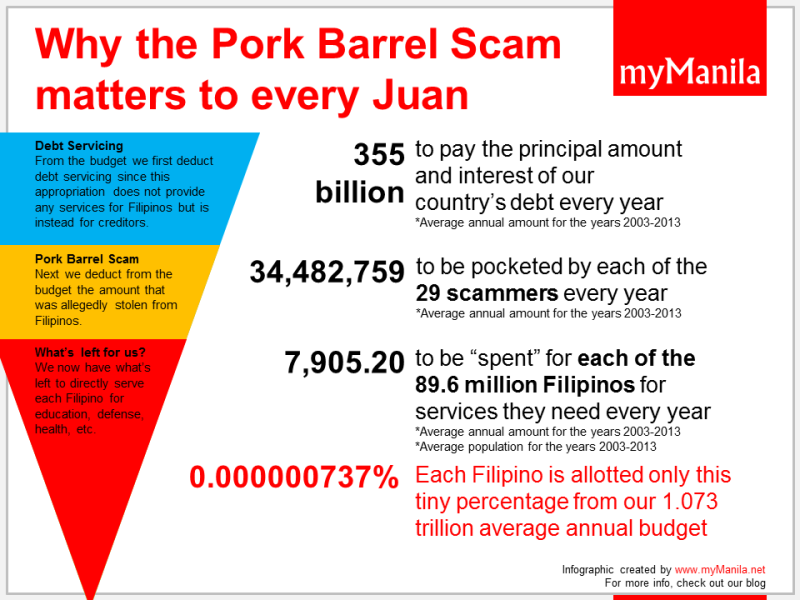 Why the Pork Barrel Scam matters to every Juan

Tomorrow, we attempt to yet again, let it be heard by our duly elected government that we will not stand for the Pork Barrel to simply be renamed, reallocated, re-appropriated to serve NOT the 96.7 million Filipinos but the few who corrupt souls.

If you look at 10 billion divided by the 29 people implicated in the Pork Barrel scam, that means that each one takes home roughly 34 million Pesos - that's for each senator, congressman, and lone mastermind of the scam.

If you look at the average budget over the last 10 years (1.073 trillion), deduct the average annual amount used to service debt (355 million) and finally deduct the average annual amount stolen from us (1 billion), that leaves 717 billion left to provide services for each of the 89.636 million Filipinos (average population in the last 10 years). That means a paltry 7,905 pesos is used to serve each Filipino. That's 0.000000737% of the annual budget! That's 34 million for each scammer and barely 7,906 peso for each hard working Filipino.

If you think about it, corruption that rampant (which is most likely just the tip of the iceberg) deprives Filipinos of the much needed budget for services they deserve. Not just the middle class - but each and every single Filipino. This is why this blog hopes for a peaceful and clean rally tomorrow, because we believe that every Juan deserves more than just 0.000000737%.
Archived in
October 2013
Infographics
Taguig City
Tagged with
Perks
Politics
Pork
Protest
Rally